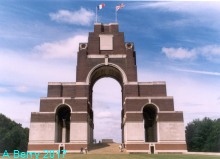 Rank and Unit at End of World War One
Rank Private

Commemorated at: Thiepval Memorial to the Missing of the Somme

Pre-war Occupation*/marital status**
Trade or Occupation pre-war: Railway labourer
Marital status: Married
* Taken from attestation papers or 1911 census
** Marital status on enlistment or at start of war
Connection with Collingham, Linton or Micklethwaite and reason for inclusion on this web site

Henry Morris Renton does not appear on the village War Memorial but we have identified him as being associated with Collingham from the Soldiers Died in the Great War database. He was born in Collingham in 1872, the son of John and Julia Renton, and was baptised in St. Oswald's Church, Collingham on the 23rd February 1873. His father was a shoemaker. Henry moved with his parents between 1872 and 1881 to live at 41 Spring Close Lane, Leeds. Henry's career started as a bleacher (1891 census) but by 1901 he gave his trade as bricklayer/labourer.

Henry married Amelia Mary Morley on the 16th Dec 1897 at Meanwood Church and then lived for a time at 32 Newport Street, Pontefract. By 1911, when he was 38, Henry was a railway contractor's labourer and living with Amelia at 10 Charlton Place, Leeds.

There is some confusion over Henry Renton's service. The Commonwealth War Graves Commission clearly records him as Private Henry Morris Renton with a service number of 21988 of the 11th Battalion West Yorkshire Regiment. He was the son of the late John and Julia Renton and husband of Amelia Mary Renton of 7, Berkeley View, Harehills Lane, Leeds. A later pension record for Henry confirms his service number as 13/21988 and regiment but gives an address at 17 Berkely View.

However a service record exists for Henry Morris Renton of Broomhill Farm, York Road, Leeds showing that on the 17th December 1914 Henry attested into the Scots Guards and joined that regiment the following day in Caterham with a regimental number of 12637. There would be nothing particularly unusual about a man joining one particular regiment and then transferring to a different one, but in Henry's case the service record shows that, seven months later, on the 5th July 1915, he was discharged from the Army under paragraph 392 subsection iii(d) of King's Regulations as "not likely to become an efficient soldier" and "a recruit who after having undergone a course of physical training is recommended by an examination board to be discharged, or in the case of a mounted corps is unable to ride". His service record makes no mention of rejoining the Army.

Despite this, Henry Morris Renton, did indeed go on to serve, becoming Private 21988 in the 11th Battalion West Yorkshire Regiment. He served in France and was Killed in Action. He was 42 at his death. There is some discrepancy on his date of death - Soldiers Died in the Great War records his death as being on the 17th May 1916, while the Commonwealth War Grave Commission records his death as occurring on the 5th July 1916. We think the latter date is more likely - no soldiers were recorded in the Battalion War Diary as being killed on the 17th May, whereas on the 5th July, the battalion was taking part in fierce fighting around Scots Redoubt during the battle of the Somme.

Henry's body was not recovered after the war and he is commemorated on the Thiepval Memorial to the Missing of the Somme.