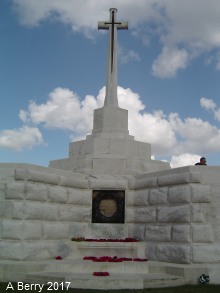 Rank and Unit at End of World War One
Rank Corporal

Commemorated at: Tyne Cot Memorial to the Missing

Other service during World War One
Information from Medal Index Cards (WO372), Medal Rolls (WO329), Service Records (WO363) and/or Pension Records (WO364) held by The National Archives.
Pre-war Occupation*/marital status**
Trade or Occupation pre-war: Clerk
Marital status: Single
* Taken from attestation papers or 1911 census
** Marital status on enlistment or at start of war
Connection with Collingham, Linton or Micklethwaite and reason for inclusion on this web site

John Stanley Wilson was born in Leafield, Yeadon on the 29th September 1897, third of five sons of Francis Henry and Charlotte Ellen Wilson.

In 1911, John was living at 88 Grange Avenue, Chapeltown Road, Leeds with his parents and family. His father was a wholesale grocer and the family lived with one lady's help. John was listed as being at School - he attended Leeds Boys Modern. At some time, John's parents moved from Leeds to The Grange, Collingham.

In August 1916, as soon as he was 18, John enlisted in Leeds, joining the 4th Battalion of the West Yorkshire Regiment. He was later transferred to the 16th Battalion (the Bradford Pals) and he was sent to France later that year. John worked as one of the Battalions Observer Scouts and was wounded in May 1917 spending a month in hospital. He returned to the Bradford Pals, but was again transferred, this time to the 1st Bn West Yorkshire Regiment and in early 1918 John was promoted to Corporal. At Ridge Wood in Belgium John was shot by a sniper on the 14th July 1918. He was buried where he fell but his final resting place was lost and he is remembered on the Tyne Cot Memorial near Ypres in Belgium.