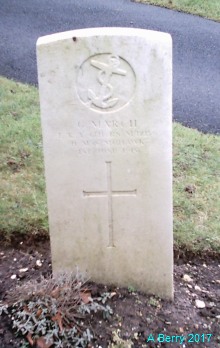 Pre-war Occupation*/marital status**
Trade or Occupation pre-war: Plumber & fitter
Marital status: Married
* Taken from attestation papers or 1911 census
** Marital status on enlistment or at start of war
Connection with Collingham, Linton or Micklethwaite and reason for inclusion on this web site

George Haddington March was born on the 17th May 1881 in Micklethwaite, the third child of George and Mary Agnes March.

George married Margaret Watson in 1906 in Stockton, Durham and by 1911, when George was 30, he had left his parents still living in Micklethwaite while he was a plumber living at 32 Jubilee Street, North Ormesby and he and his wife had two sons, John George (b.1907) and Frank (b.1908). Before 1915, they had a further 3 children, twins Dorothy and Mary Agnes (b.1913 in the Leicester area, but baptised at St. Matthew's church Marylebone, and Arthur Lloyd (b.1914), and at some time moved to London where Margaret's address was 26 Andover Place, Maida Vale.

In February 1915, George joined the Royal Navy as an Acting Engine Room Artificer and served first with HMS Pembroke II and HMS Attentive II. These were shore establishments; HMS Pembroke II was a Royal Naval Air Station at Eastchurch between 1913 and 1918 and George probably got his basic training there. HMS Attentive II was at Dover, being the Base Ship from 1904 to 1914 and the Shore Station from 1914 to 1919. On the 30th March 1915 George joined HMS Mohawk. This ship was a Tribal Class or âFâ Class Destroyer.

In early 1915, HMS Mohawk was based in Dover as part of the 6th Destroyer Flotilla and was engaged on the âDover Patrolâ. This patrol performed several duties in the southern North Sea and the Dover Straits. At various times during the war, the ships of the Dover Patrol mounted anti-submarine patrols, escorted merchantmen, hospital and troop ships, guarded the southernmost waters of the North Sea, laid and maintained anti-submarine nets, swept up German minefields, laid our own minefields in the Dover Strait and bombarded enemy positions on the Belgian Coast.

At 11am on Monday 31st May 1915 HMS Mohawk slipped from the dock and proceeded out of harbour on No. 1 Patrol. All was well with the vessel and the crew was piped down at 9.30pm. The next day, Tues 1st June, at 03.15am the ship stopped and picked up an indication buoy but was underway again at 03.20. At 05.25 the shipâs log records that the ship âstruck a German mine on the starboard quarter while patrolling on No. 1 Patrol.â The shipâs position was given as 1.5 miles south of the South Goodwin Lightvessel. HMS Mohawk fired off 6 rounds of blank ammunition and 1 rocket to attract attention. Trawlers came to the ships assistance at 05.45 and the shipâs company was placed into the trawler. HMS Mohawk was towed by a trawler back to harbour. There were several casualties â 5 men were killed and 4 severely wounded. The ships log states that the âdamage was considerableâ. The ship reached Dover Harbour at 07.00 the same day.

At first, in a telegram to âAdmiral Doverâ, a number of men were reported as âmissing â presumed to have lost their livesâ but this was very soon changed to âkilledâ. Those killed or injured were:

The menâs next of kin were informed immediately of the lost of life, but because of security full details were not provided. George Marchâs family were certainly not given full details at this time and the local reports of his death were also inaccurate. For example, the Wetherby News of 4th June 1915 reported: "On Wednesday evening Mr and Mrs George March of Micklethwaite, Wetherby received from their daughter in law a wire containing the sad intelligence that their only son, Petty Officer George Haddington March, of the destroyer Mohawk had been killed in action, it is believed in the Dardanelles operations. George March, when in Wetherby was employed by Mr Frank Stead, plumber, but it is some years since he left the town for London, where up to the outbreak of war, he was working as manager at some hydraulic steel works. Keen on joining the Navy on the outbreak of hostilities, he studied hard for his examinations, and was drafted to the Mohawk in January. About 30 years of age, Petty Officer March leaves a wife and five children. On learning the sad news Mrs March sen. was so affected that she had a slight seizure and is now confined to bed."

The lack of official information from the Admiralty prompted two of the next of kin of men who were killed to contact the admiralty asking for more details. The admiralty later told the relatives that the explosion had been caused by a mine, but asked them not to disclose that information. The relatives were also told that for those sailors who lost their lives, death would have been instantaneous.

About one week after the explosion, funeral parties from HMS Mohawk formed up, and George March was buried at Dover (St. James) Cemetery.

George Haddington March is also commemorated on the World War 1 memorial in St.James' Church, Wetherby, on the Wetherby War Memorial and on the Hutton Rudby War memorial.